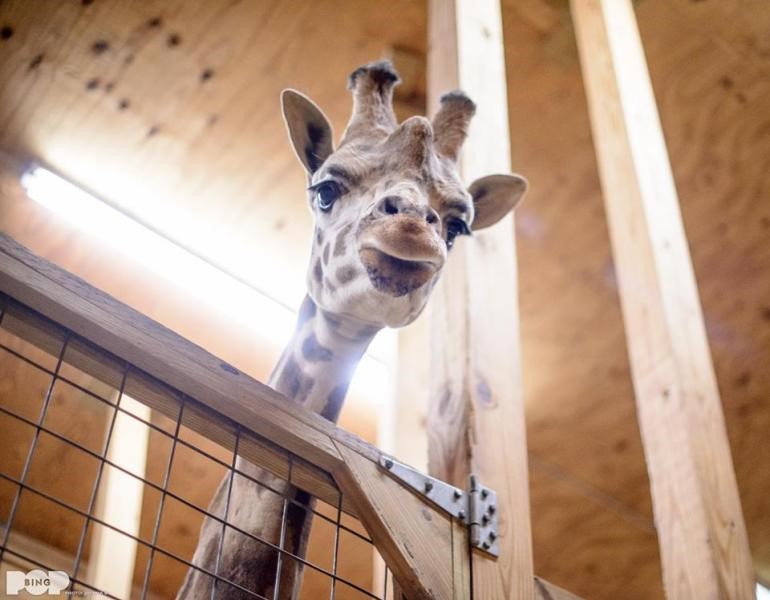 April the giraffe – she looks annoyed, doesn’t she?  I would be too if my labor lasted up to several weeks.

I learned some things about giraffes on March 9, 2019.  The biggest thing being that they can be in labor for days, even weeks (though unfortunately, I didn’t learn that until much later in the day).  I saw a post from one friend to another about April the giraffe at “Animal Adventure” having a baby that morning, so I clicked on the video to check it out (it was a live stream from the park where she is homed).  And then I watched.  And  watched.  And watched.  At 12:40pm she got into what I was sure was a position to squirt a baby giraffe out.  I got all excited and grabbed my phone forgetting how to text in my excitement.  By the time I remembered how, she was pacing around again, and no baby was forthcoming (at that moment anyway).  I was sort of glad I forgot how to text because that would have been embarrassing when I announced to the world (or a couple of chosen friends) that April was squirting it out but really she probably just had gas.  (I will note the phone is newish and I’m not totally used to the operating system yet.)

All day long I kept April on the lap top screen (while using the main monitor for other viewings).  I would move her to the big monitor when I went into the kitchen to make food so I could see it from there.  I brought the phone to the bathroom with me with her on it just in case she decided to deliver while I was otherwise occupied.  I didn’t go anywhere, I stuck close by.  At one point I decided I better try to take a nap since a friend was coming over to play some music that night.  I put April on in the bedroom on that laptop and didn’t really nap very well because I didn’t want to miss it.

Then I learned once the hooves show, it is another two hours before the baby fully emerges.  I thought it would be like a horse delivery – that the baby would just sort of swoosh out in one fail sweep and plop on the floor.  But no, no swooshing allowed.  Who wants a baby giraffe hanging out of them for 2 hours?  I certainly don’t and I doubt giraffes do either.  I think maybe horses have it made in the birthing department.  Their system is surely better than giraffes and humans anyway.

Since I was glued to the apartment for the impending delivery, I decided it would be a good day to organize and rearrange all my jewelry for sale and to make more stuff for said sale.  (This jewelry sale so far just exists in my head.  Etsy is certainly not of any use.)  Imaginary or future live sale, it didn’t matter, I had earrings to arrange and necklaces and bracelets to bag.  I made another 24 of the quicky necklaces and a dozen plus pairs of earrings to fill the gaps on my earring racks.  (I still have some open spaces, but I am much closer now to filling those things up, each holds 96 pairs or double that if you put two earrings in each hole, but I don’t like to display them that way, thank goodness.)

When my friend Barbara came over that night to sing, I introduced her to April the giraffe (still pregnant at 7:30pm).  (Here I would like to note that Barbara was only about 30 minutes late, a minor miracle, so while no minor miracle of birth, at least I had that to hold on to.)  Barbara wanted to work on some folk songs she wanted me to harmonize with her on for her upcoming birthday party.  They were really simple songs, so harmonizing was a breeze.  We dialed up the lyrics and put them on the big monitor and kept April on the smaller, laptop monitor.  At one point when I glanced over, I found April had sat down.  I am sure she was just relaxing to our harmonies (because if I can see her through the computer, surely she can see/hear me too, right?).  Barbara left around midnight and April seemed to settle in for the night so I went to bed.  BUT, I put the livestream on in my bedroom and woke up all night long looking for hooves or maybe half a giraffe sticking out (or perhaps a baby already that arrived while I slept).  But there was no baby.  I am much more prepared for my imaginary jewelry sale though.