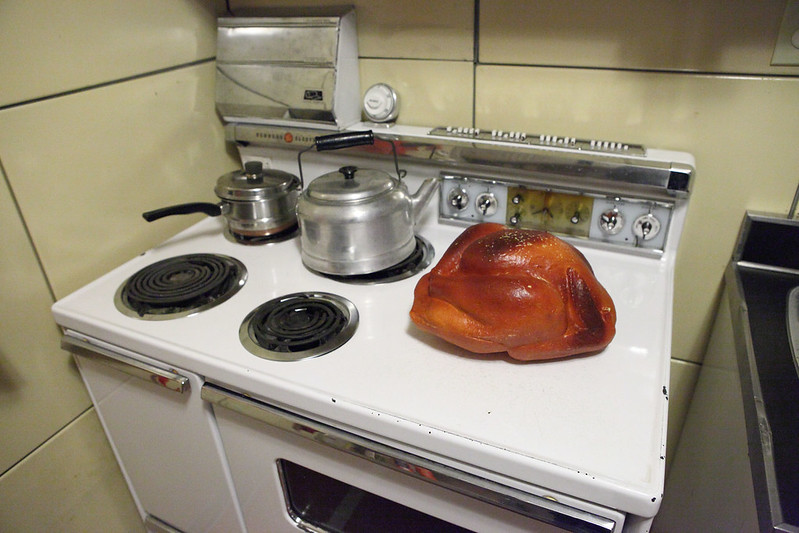 We got a new oven today. The old one must have been at least twenty years old and was filthy from the last tenants, no matter how hard I tried to clean it. It also had never really worked properly–one of the back burners was dead, and the others would sputter out if we simultaneously used the oven. Even starting the working burners required a certain coordination that was difficult to master. When we had babysitters come at night, we always
started the cooking before we left so that they wouldn’t have to struggle with hissing the gas and flints, and the tricky timing that singed your finger hair if you got it wrong. One day, the oven door handle broke off on one side, the metal completely corroded through. We kept awkwardly using it for a week or two, carefully pulling the door open from the intact side of the
handle until Christian’s grip slipped; the door snapped shut so violently that the insulation glass on the front shattered into a million pieces across the kitchen floor.

It took over two months for the building to come and replace the oven. That happened today, March 9th, 2021. When the workman loosened the gas hose and shimmied the old one out the door, I had ten minutes to clean eight years of grime that had collected underneath it. There was a yellowed advent calendar whose printed paper had been baked to a crisp, lots of thick, ropey cobwebs, a Euro cent stuck fast to the floor and a NYC Metrocard that had expired in 2014.

The new oven is so shiny and clean, and I like knowing that no one else’s dirt is inside. The two baking sheets that came with it aren’t caked with black grease and there are no bits of ancient food beneath the stovetop. Louis and I made popcorn to christen it and as we sat munching
away in the kitchen, I thought about how what a luxury it is to have something that we are the first to own. I thought about my hopes to move to a nicer apartment and that when we do, we could get rid of other old things we have, like our lumpy old couch or the stained kitchen tabletop that drifts off its legs. I wouldn’t replace them with anything fancy, just things that were clean and comfortable, and worked like our new stove without any special instructions. As sunlight poured in through the windows and reflected across the bright surfaces of the stove, these luxuries suddenly felt within reach.

A little while later, Louis and I went out to go to his drumming lesson and discovered our old oven abandoned on the curb in front of our building. The workmen had said they would “take care” of it, but there it was–looking so derelict that I couldn’t believe it had come from our
apartment. My stomach sank and the illusions of grandeur that I had briefly entertained came crashing down. Our trash was haunting us, bringing us back into the world where we belong.