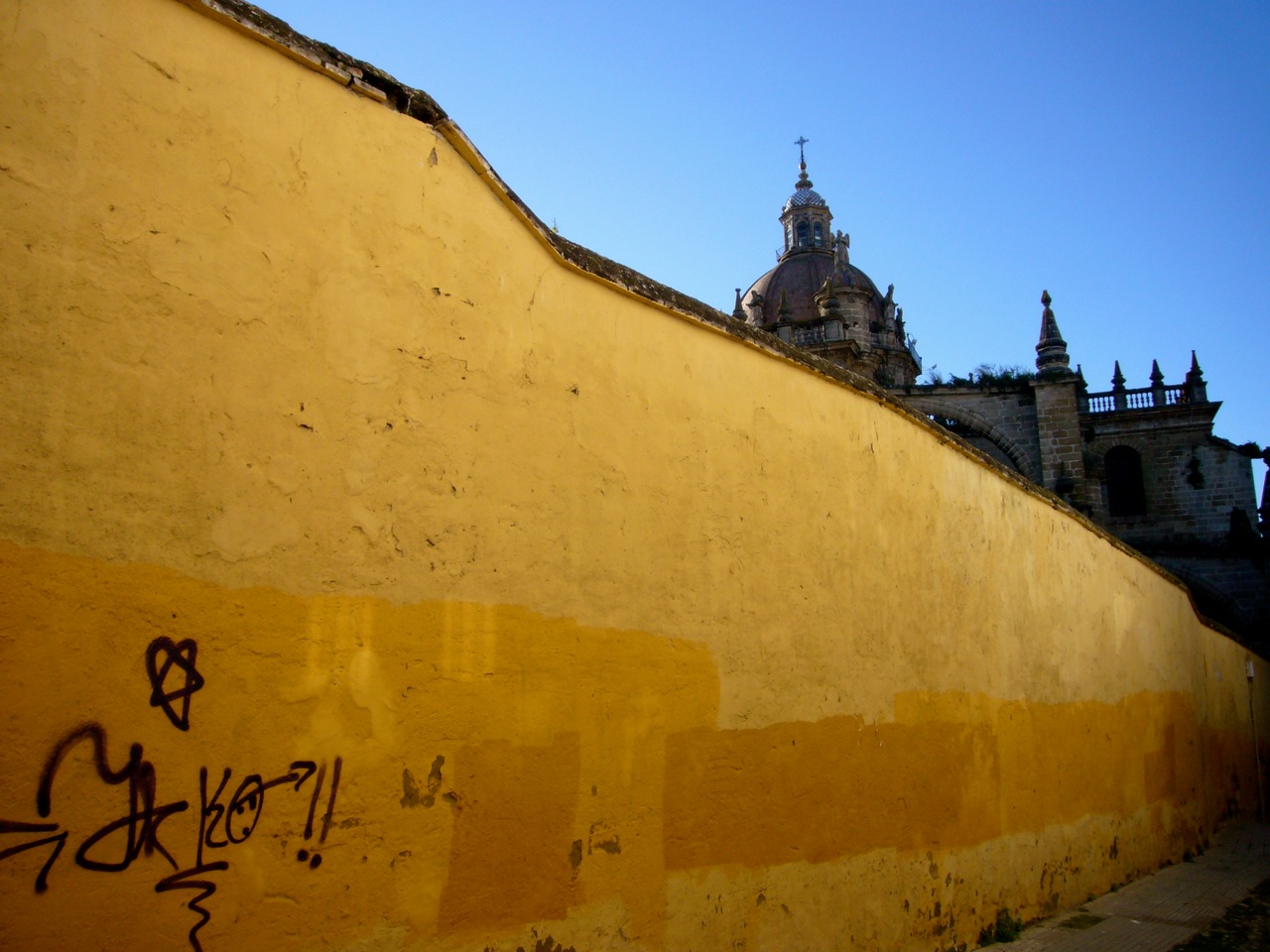 On March 9, 2010, I was in Jerez de la Frontera. Here is a photo of the cathedral.
I was backpacking around Andalucia interviewing bullfighting experts for my new novel, Alex y Robert, about an American college girl who wants to break into the bullfighting world.  The novel will be released in July by my London publisher, and this is my last chance to go back to Spain to do some last location shoots.
My novel takes place in San Francisco, Austin, Sevilla and Cadiz.  When I was writing this novel last year, back in Texas, I “shot” scenes in restaurants, cafes, plazas and streets that I guessed existed, but wasn’t really sure.  On this second trip to Spain, I walk the same streets and am amazed to find locations that were exactly the way I imagined.
Here is the corner bar that Alex, Joselito and Roberto got drunk.  Here is the hookah bar where they fell asleep on the floor.  Here is the toy shop where she tried to buy a toy gun.  This is the river where they jogged every morning for their training.  Here is the market they ducked in to get out of the rain, where Roberto, in a fit of inspiration, borrows a bolt cutter and cuts the lock on the bridge which his old girlfriend had placed as a pledge of love.
I had to make some adjustments, of course, to my novel.  I changed the neighborhood where my protagonist lived.  Neighborhoods turned out to be smaller, more modest, than I had imagined.  The polarity between modernity and history, in some locations, was more extreme than I thought.  Some things I wrote were impossible.  They couldn’t have watched a movie in downtown Cadiz, for there were only two cinemas, both in the more modern outskirts.  Downtown Cadiz was an 18th century ruin.
I am as thrilled going on this tour as you would taking the “Da Vinci Code” tour in Italy, except in my case, I wrote the book myself, and am going on a literary tour of a world created by me.  I realize the power of creating a whole world out of nothing.  I am as convinced of the story in this novel as I am of a movie I have just seen.
On the train, I write a French email to my writer friend in Toulouse.  He suggests that if I was really serious, that I apply for a writer’s residency in France, near the ancient bullfighting town of Nîmes, and work on the French translation of Alex y Robert.  I look at a photograph of a rural village, a yellow cottage, and think about how I can get there next year.  I think about speaking in French to people in Southern France about my book.
I look out of the train window and think of how marvelous the world is, and how languages can open doors.  There is only one guiding principle in my work: to write what my Chinese parents and grandparents in Singapore could never write; to see what they could never see; to say all the things they never could say.
I come from a culture where pursuing your dream, and expressing yourself, is seen as the ultimate act of self-indulgence and narcissism.  But who is harmed by my actions?
Here, at the edge of the Atlantic, before a turquoise ocean, the demons are very far away.  The cupola of the cathedral is lemon yellow in the cold spring light.  Stand here beside me; let us look across the ocean at North Africa together.  This is a land littered with Roman walls and temples.  If we train to Algeciras, we can be in Tangiers tonight.  Let me I ask you, wherever in the world you may be: what are you not doing today that you need to do?  And what is stopping you from doing it?
I leave you with the Spanish blessing of good luck.  It is a common word, but it is very beautiful and virtually untranslatable.  Matadors say this to each other before stepping into the ring.  Suerte.