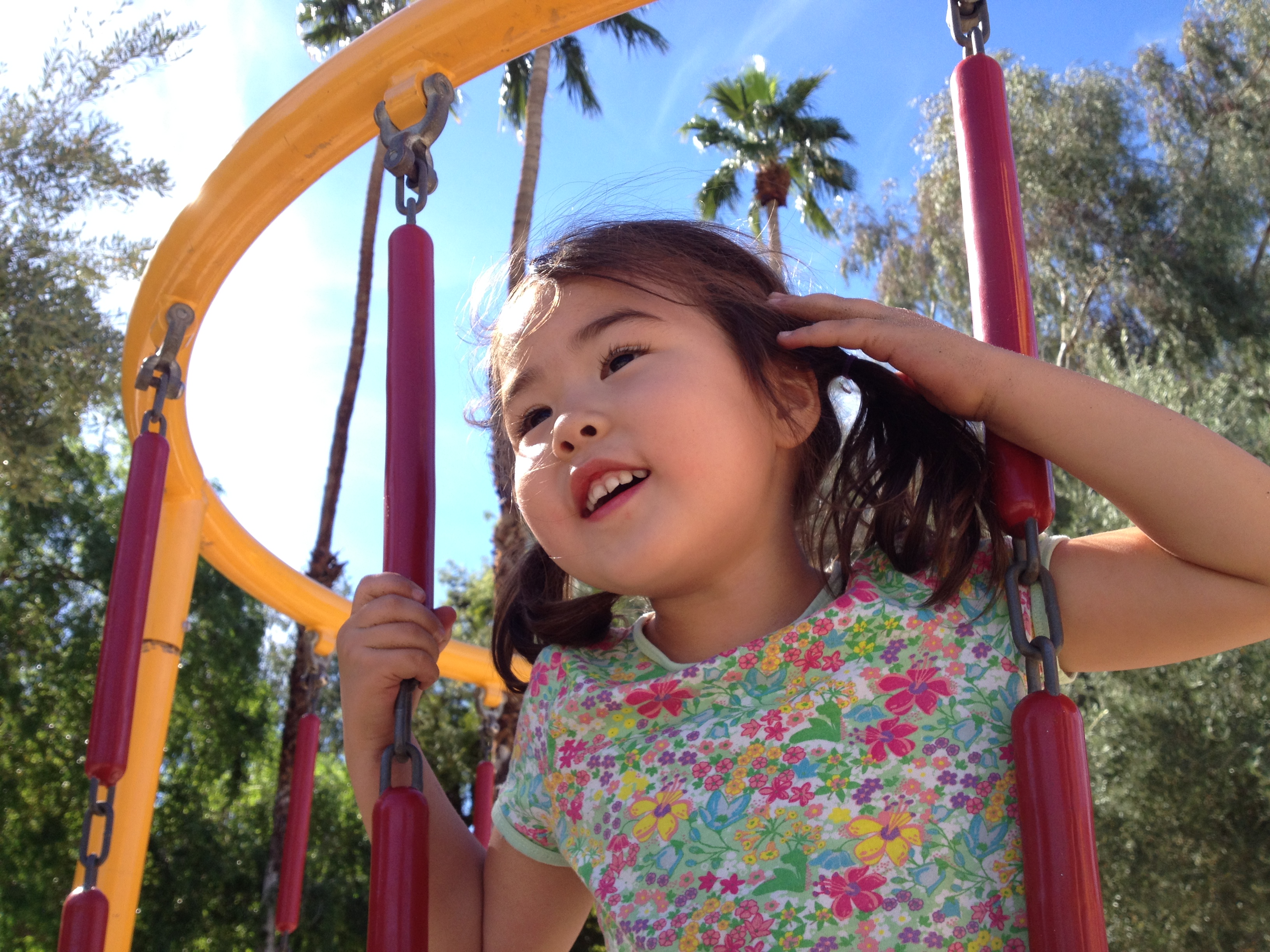 The Magic of Being 4

What’s it like being 4 years old? I listen to my daughter and I wonder. Naomi was filled with energy and spunk today as we arrived at the baseball field under sunny skies to watch her brother play his first Little League game of the season, a doubleheader. The 9- and 10-year-olds cheered loudly, hit balls with aluminum bats and slid into bases in clouds of dust. But my daughter took little notice of the spectacle on the other side of the chain-link fence. For her, she was at the center of the most exciting game. She held her toy bat on the lawn next to the diamond, and my wife and I took turns pitching to her, lobbing a soft, padded ball the size of a grapefruit. Often, she hit the ball and with glee went running off as if to round the bases. She giggled and smiled as we chased her. And when she stood ready to bat again, she turned around to me, her catcher, and said: “Daddy, when I do a good one, say ‘Whee!’ OK?”

Later, while I was standing by the dugout watching the game, she tugged at my hand and said, “Daddy, let’s play hide and seek.” It didn’t matter that there was practically nowhere to hide nearby. Hiding behind a large lamppost, she tried to stay hidden and broke out laughing when I spotted her.

While the boys ate hotdogs between their games, I took Naomi to the playground, where she delightedly clambered up a chain climbing wall. She seemed especially pleased when she climbed higher than my head and reached out and put a hand on my baseball cap. She tried different positions, at times holding fast to the chains with her legs and letting go with her hands. Starting again on the bottom rungs, she hooked her legs over a plastic-covered chain and then leaned back, hanging upside down. Once, she tumbled down into the sand. She was at first startled by the fall but then smiled and climbed right back up again.

When it was time to return to the baseball field, I took her by the hand and we started running. “The last one there is a rotten egg,” she said, repeating a phrase she learned from her brother.

Along the way, we passed a group of teenage soccer players carrying a trophy. And as we continued on, she said, “I’ll go get a trophy.” She paused, took a few steps to the side and held an imaginary trophy in her hands. When we reached her mother, Naomi told her triumphantly that she had won a trophy.

Why is it that pretending and imagining are such fundamental parts of playing in the mind of a 4-year-old? Lately I’ve been struck by the stream of creations that Naomi spins from her mind as we play together. She regularly talks about “Kalas,” her imaginary sister, and tells me that she has done all sort of things, and has visited many places. If I mention Mexico, for instance, she is likely to say, “Oh, yeah. Kalas has been there.”

One day while I was driving Naomi to school, she told me about having seen pink owls. Another day in the car, she mentioned that she would like to have a pet shark.

Today, I let myself put aside work and other tasks, and I put away my smartphone for a couple of hours to focus on being with Naomi. By doing this, I got a glimpse of more of her imaginary world.

As we sat together on the grass, Naomi exclaimed excitedly, “Look, there’s a monster.”

As she went running off toward the monster, I asked her what she was going to fight it with, what sort of weapon. She answered, matter-of-factly, “I have my pink sword.”

Now and then, I tried to follow the baseball game and stood up behind the chain-link fence of the backstop. But even as I clapped and cheered, Naomi called out to me. Holding an imaginary phone to her ear, she said: “It’s an emergency.” I joined the conversation, mouthing words and holding a phone to my ear.

I began to think about what sorts of lessons 4-year-olds might offer to adults. Maybe one of those lessons is that playing and being present in the moment can aid storytelling, creativity and even problem-solving.

I recently read about one new study in which researchers found that 4-year-olds can be better than college students at solving some types of problems – figuring out how certain gadgets work – apparently because children are more flexible in their ways of thinking.

I also recently thought of Naomi while watching “SlingShot,” a documentary about inventor Dean Kamen, who said that when most kids grow up, “we actually lose our sense of fun, our imagination, and a whole lot of things that I didn’t want to give up.”

After the baseball game, Naomi and I went swimming together in the pool, and she laughed with delight in the cold water. As I swam, she held onto my neck and rode on my back. I told her I was a crocodile. She said she wanted to be a baby crocodile and swam alongside me.

As she sat in the hot pool, she grabbed at bubbles and said: “I got you, I got you.”

Looking out at the pool, she said: “I see a baby dolphin there. The baby dolphin wants to stay here with me.”

Sunset began to light up the clouds overhead. I pointed out a mass of pink clouds near the mountains, and Naomi remarked: “It looks like my whale.”

Up above us, another wispy cloud had turned bright orange in the fading light. Maybe I was starting to think a little more like my daughter, because I thought to myself, what does that cloud look like? To me, the wavy shape looked something like a seahorse. I asked Naomi what she thought it looked like.